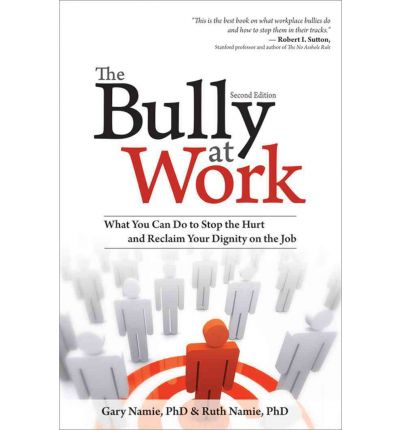 What are some of the best books on workplace bullying and psychological abuse at work?

Last week, I followed an informal e-mail thread among advocates for the Healthy Workplace Bill who were discussing what books might belong on a recommended reading list about workplace bullying. The dialogue inspired me to attempt my own list of 20 books on bullying and related topics.

Some of the listed books are expensive and/or hard to find. Further, to keep to 20, I had to leave many fine books off the list. Finally, obviously I couldn’t include the bevy of important journal articles that are “must reading” for those who want to immerse themselves in the relevant literature.

That said, I think this is a good starting place for learning more about workplace bullying and related issues of employment relations.

Andrea Adams, with Neil Crawford, Bullying at Work: How to confront and overcome it (1992) — A pioneering work by a BBC journalist whose investigations into workplace bullying helped to launch the anti-bullying movement.

Richard V. Denenberg & Mark Braverman, The Violence-Prone Workplace: A New Approach to Dealing with Hostile, Threatening, and Uncivil Behavior (1999) — Two experts on workplace violence tie together different forms of aggression at work and offer recommendations for dealing with them.

Tim Field, Bully in Sight (1996) — One of the first works on workplace bullying by an early U.K. anti-bullying movement advocate.

Robert W. Fuller, All Rise: Somebodies, Nobodies, and the Politics of Dignity (2006) — Though not primarily about workplace bullying or employment relations, this book by a physicist and former college president places bullying in the context of the need for a “dignitarian” society.

Marie-France Hirogoyen, Stalking the Soul: Emotional Abuse and the Erosion of Identity (English ed., 2004) — Important analysis of emotional abuse in private lives and in the workplace by a French psychiatrist and therapist.

Randy Hodson, Dignity at Work (2001) — Broad examination of dignity at work, including bullying behaviors, from a sociological perspective.

Harvey Hornstein, Brutal Bosses and Their Prey: How to Identify and Overcome Abuse in the Workplace (1996) — This work by a social psychologist examines bad boss behaviors, with especially relevant research findings and commentary about abusive supervision in the midst of difficult economic times.

Ronnie Janoff-Bulman, Shattered Assumptions: Towards a New Psychology of Trauma (2002) — Although not specifically about workplace bullying, it provides an insightful, easily grasped framework for understanding why severe psychological abuse at work can be so traumatizing.

Gary Namie & Ruth Namie, The Bully at Work: What You Can Do to Stop the Hurt and Reclaim Your Dignity on the Job (2nd ed., 2009) — The latest edition of a seminal work by the individuals most responsible for introducing the concept of workplace bullying to a North American audience. (Disclosure note: I have worked with the Namies and their Workplace Bullying Institute on a pro bono basis for over a decade, and my work is discussed in this book.)

Charlotte Rayner, Helge Hoel & Cary L. Cooper, Workplace Bullying: What we know, who is to blame, and what can we do? (2002) — An important, comparatively early book by three leading scholars on bullying and stress at work.

Robert I. Sutton, The No Asshole Rule: Building a Civilized Workplace and Surviving One That Isn’t (2007) — While the title alone guaranteed this book a fair amount of attention, its discussion of incivilities at work is noteworthy in its own right.

Kenneth Westhues, The Envy of Excellence: Administrative Mobbing of High Achieving Professors (2006) — Centers around a masterful and chilling case study of how a well-known theologian was mobbed out of his teaching position, full of insights about individual and organizational behaviors. (Disclosure note: My work is briefly discussed and critiqued in this book, and I contributed a responsive essay to a followup volume.)

Judith Wyatt & Chauncey Hare, Work Abuse: How to Recognize and Survive It (1997) — One of the earliest books about psychological abuse at work, and still valuable.