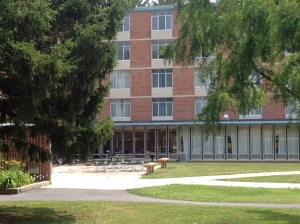 A not-too-artistic shot of Brandt Hall dorm, my collegiate home for almost 3 years, until departing for the real world.

Before commentators invoked the (wholly accurate) mantra that the Great Recession marks the worst economic crisis since the Great Depression of the 1930s, they typically observed that this was the worst meltdown since the severe recession of the early 1980s.

I remember that time well. In 1981, I graduated from Valparaiso University in Indiana with a bachelor’s degree and a political science major. My plan was to work for a year, live at home with my parents, and file my applications to law schools.

Although I presented excellent grades and a strong list of extracurricular and community activities, the entry-level job market in northwest Indiana was not very welcoming to newly-minted college graduates. The nation was in the midst of a deep recession. Locally, the labor market in the region was in especially bad shape, thanks to the sharp decline of the steel industry, which once served as a steady source of good jobs.

Given my extensive experience on the college newspaper and a long list of courses requiring intensive writing, I applied for jobs with newspapers and other positions that required strong writing skills. The best I could come up with was a very part-time position reporting on local town government meetings for a weekly community newspaper.

Ultimately, after several months of unsuccessful hunting for a full-time job befitting (in my mind) a college graduate, I contacted the local drug store chain I had worked for as a retail stock clerk during college summers and asked if they needed help. Fortunately they were opening a new store in the area, and they took me on. I would spend the next year working there, unloading trucks, stocking shelves, checking inventories, and assisting customers.

A year later, when I headed east to law school at New York University and heard about what my classmates had done with their time after college, I was wholly intimidated. Many sported impressive internships and fellowships, jobs with prestigious-sounding employers, and the like. By contrast, my job at the drugstore and the part-time gig writing articles for a local paper sounded pretty ordinary.

With the gift of hindsight, however, I look at that interim year and realize that I learned valuable lessons that are relevant to my work today:

First, I experienced the indignity of having my hours (and thus pay) slashed without notice when sales figures were less than anticipated. To this day I remember how it felt to report for work one day and to see that one of the company executives had taken a red pen to our work schedule, brutally cutting hours.

Second, I saw how some of the female employees, earning wages similar to mine, became primary family breadwinners after their husbands lost their jobs in the steel mills. They assumed these burdens without whining or drama.

Third, on a more positive note, the experience buoyed my work ethic. I’m not claiming that I found any deep meaning in working retail. This was a non-union employer, and the wages were pretty low, hovering a dollar or so above the minimum wage — with no employee benefits that I can recall.

But the store managers were hard workers, they weren’t jerks, and oftentimes they’d join us to do the heavy lifting that needed to get done. (Later in life I would discover how this is not necessarily the norm!) Even though this was far from my dream job, I gave it a good effort almost every shift.

I’ll stop short of calling it a “humbling” year, because I honestly didn’t expect the world to hand me a high-paying professional job on a platter, but I certainly learned that sometimes you have to take what you can get if you want to earn some money.

Why today is worse

So, when talking to graduates today, do I use my career successes to blithely assure them that things will get better? Absolutely not. Besides the fact that, like many of my peers, I am one job loss away from genuine financial struggle, here are reasons why today’s graduates have it harder:

The current meltdown shows strong signs of being more structural than cyclical. By that I mean certain financial and labor markets are in the throes of downward restructuring, translating into a likely permanent shedding of jobs. The recession of the early 80s had some of that quality — the demise of the steel industry is one example — but the outlook for college graduates remained optimistic.

Today’s economy reflects the cumulative effect of “trickle down” public policies that triggered a sharply growing gap between the wealthiest Americans and everyone else. These policies, ushered in by the election of Ronald Reagan in 1980, were just starting to redefine the landscape at the time I graduated from college.

People today are graduating from various degree and vocational training programs with enormous amounts of student loan debt, as I have observed often on this blog. The shift from grants to loans as the primary form of financial aid was occurring before our very eyes during the 1980s, and it has continued unabated since then. It means that graduates are carrying heavy monthly repayment obligations into a difficult job market.

Older workers remaining on the job

As I wrote earlier this month, the entry-level job market for graduates increasingly will be restricted by a growing number of older workers who remain in the labor force because they cannot afford to retire.

I do believe that opportunities are out there. It’s not like we’ve run out of work that needs doing. But the current economic landscape is much different than that of the early 80s. We are facing very tough times for the long haul. It’s one more reason why we need to think and act wisely about how to rebuild our economy in a lasting and sustainable way.

Note: With Commencement season coming to a close at colleges and universities across the nation, I beg my readers’ indulgence as I use a short series of posts to reflect upon my own collegiate experience and its immediate aftermath to address topics pertinent to this blog.

Other posts in this short series