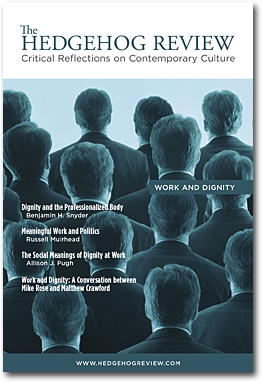 The Hedgehog Review, an excellent non-fiction journal published by the Institute for Advanced Studies in Culture at the University of Virginia, spotlights the topic of “Work and Dignity” in its Fall 2012 issue. Here are the featured pieces, two of which (Snyder and Rose/Crawford) are freely accessible online:

Dignity and the Professionalized Body: Truck Driving in the Age of Instant Gratification (Benjamin H. Snyder)

The Social Meanings of Dignity at Work (Allison J. Pugh)

Work and Dignity: A Conversation between Mike Rose and Matthew Crawford

Human Agency and the Ethics of Meaningful Work: A Bibliographic Essay (William Hasselberger)

The journal also is available by subscription, and I’ve seen it in the periodical sections at Barnes & Noble and other bookstores.

Alas, my quick review of the full issue turned up nothing specific about workplace bullying, mobbing, and harassment. That’s a shame, because these forms of abuse are a paramount denial of individual dignity at work. Despite significant progress in “mainstreaming” workplace bullying as an employee relations issue, this omission is a sign that we still have a ways to go.

Nevertheless, the issue looks to be a good one, and — obviously — the more we can get the concept of human dignity into our everyday discussions of work, the better.

For those who want to delve more into the general subject of dignity at work:

In 1997, The Hedgehog Review published a thematic issue on Human Dignity and Justice, including Michael Zuckert’s excellent essay, “Human Dignity and the Basis of Justice: Freedom, Rights, and the Self.”

Sociologist Randy Hodson’s Dignity at Work (2001) remains a valuable contribution to the literature.

I’m always happy to suggest Robert W. Fuller’s work on “rankism” and the need for a “dignitarian” society, especially his books All Rise: Somebodies, Nobodies, and the Politics of Dignity (2006); Somebodies and Nobodies: Overcoming the Abuse of Rank (2003); and a shorter volume co-authored with Pamela A. Gerloff, Dignity for All: How to Create a World Without Rankism (2008).

Among several recent, thought-provoking books on the subject of dignity generally, my favorite is by international conflict resolution expert Donna Hicks, Dignity: The Essential Role It Plays in Resolving Conflict (2011), mentioned before on this blog.

For several years, it has been my pleasure to serve on the global advisory board of the Human Dignity and Humiliation Studies Network, led by Drs. Evelin Lindner and Linda Hartling.

My 2009 law review article, Human Dignity and American Employment Law, attempts to pull together a wide variety of employment and labor law topics under the dignity umbrella.