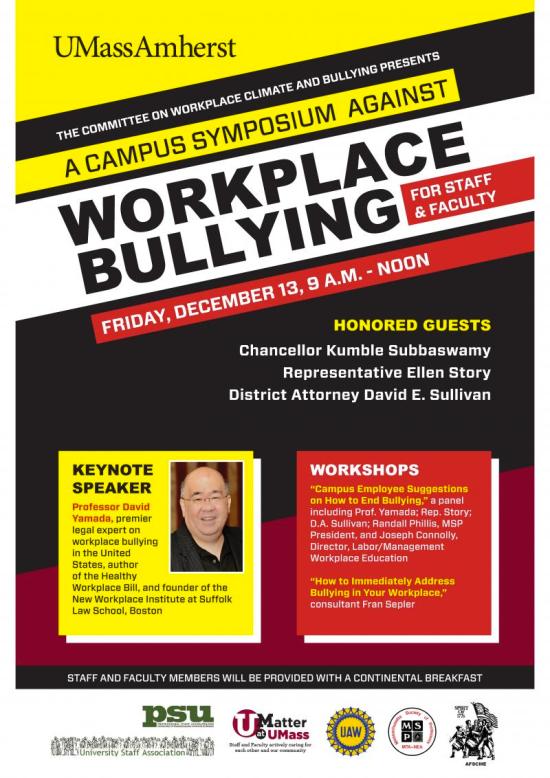 Yesterday the University of Massachusetts Amherst, the flagship entity of a major public university system, publicly launched a workplace anti-bullying initiative with a campus symposium that attracted over 500 UMass employees. This remarkable turnout, which included staff, faculty, and administrators, was over triple the number of RSVPs for the event.

This very successful kickoff was the result of some three years of dedicated, steadfast, often very challenging work by a cross-campus Committee on Workplace Climate and Bullying and the strong support of a new Chancellor, Kumble Subbaswamy, who offered welcoming remarks at the symposium.

I had the privilege of presenting the keynote address, and one of the lasting memories I’ll have is that of standing at the podium and seeing the large auditorium fill with people, with some having to stand even after dozens of extra chairs were brought in to accommodate the overflow.

Support from the top

Last spring, Scott Merzbach of the Amherst Bulletin reported on Chancellor Subbaswamy’s support for this initiative:

Saying he wants the University of Massachusetts to do better, Chancellor Kumble Subbaswamy has launched a campaign to address workplace bullying.

In a memo sent to faculty and staff this month, Subbaswamy wrote that the university will be taking steps to deal with the bullying at UMass that came to light in a survey released in September.

“While the numbers were consistent with those found at workplaces of all types throughout the country, this is clearly an area in which UMass Amherst aspires to be something much better than average,” Subbaswamy wrote.

In addition to numbers, the survey also featured anonymous comments.

Subbaswamy’s memo cites these “poignant comments” as a reason to move toward eliminating bullying from campus.

The full report on the survey, prepared by Elizabeth Williams and Yedalis Ruiz of the School of Education, can be downloaded here.

Just the start, but an encouraging one

The symposium is just the start for the UMass initiative, and committee members are well aware of the challenges before them in this multi-year effort to stop bullying and to change the campus culture. Among the next steps will be a series of trainings, as well as the development of a campus workplace bullying policy. They also will conduct extended outreach to individual departments.

The committee members have genuine reason to be encouraged. True, the large turnout reflected the seriousness of this problem on campus, but it also demonstrated that many are willing to give this initiative a chance to succeed. Such levels of cross-campus interest and top leadership buy-in are rare. Public acknowledgement of a major problem is a hard thing for many organizations, but UMass did so in a very meaningful way yesterday. It was definitely an inclusive step in the right direction, and UMass has an opportunity to serve as a positive example and model for other schools in the years to come.

I’d like to offer special thanks to the committee members who worked most extensively with me to help develop the keynote address and to host my visit: Derek Doughty, Amy Brodigan, and Joe Connolly.

The symposium was buoyed by active support of many union leaders at UMass Amherst, a public employer that is heavily unionized. I’ll have more thoughts on that in my next post.