As reported here earlier, a new scientific public opinion survey on workplace bullying in the U.S. conducted by the Workplace Bullying Institute shows that bullying at work remains a serious problem in the U.S., that employers are doing little to stop it, and that the American public strongly supports workplace anti-bullying legislation. The 2014 survey, done in conjunction with Zogby Analytics, surveyed a nationally representative sample of 1,000 adults in late January.

The overall survey results strongly point to the need for passage of workplace bullying legislation.

For those who would like a more visual presentation, here are four infographics prepared by the WBI team that highlight important survey findings. First, we see the prevalence rates, based on a definition of bullying that parallels the language of the anti-bullying Healthy Workplace Bill, which serves as the primary model for law reform efforts across the country:

Next, we see that supervisor-to-subordinate bullying remains the most common scenario: 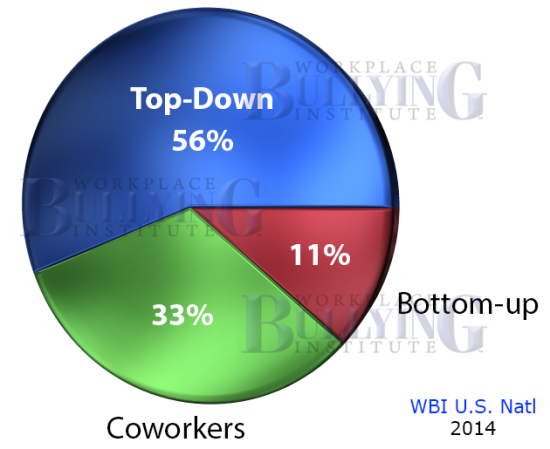 Third, we see that employers aren’t exactly rushing to stop bullying at work when it occurs. Here is the breakdown of employer responses to reports of workplace bullying:

Fourth, we see that the most common “resolution” of workplace bullying is the target, rather than the perpetrator (“P” on the pie chart), leaving the job:

Finally, WBI also surveyed the respondents on their potential support for the Healthy Workplace Bill. Here is their summary, posted to the WBI webpage, which shows overwhelming public support for workplace bullying legislation:

Question: Do you support or oppose enactment of a new law that would protect all workers from repeated abusive mistreatment in addition to protections against illegal discrimination and harassment?

It is clear that the American public wants to see worker protections against abusive conduct extended beyond the anti-discrimination statutes – 93% support specific anti-bullying legislation.

Legislation designed to provide that protection – the Healthy Workplace Bill – has been introduced in 26 states (as of the date of this Survey) but has not yet been enacted into law.

Furthermore, 50% of Survey respondents self-defined as Conservatives strongly support the Healthy Workplace Bill. With such little opposition from those expected to oppose the bill, it is a certain conclusion that now is the time for passage of this new law.