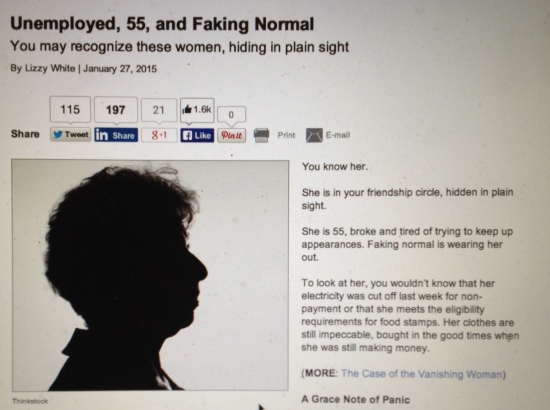 Screenshot from Next Avenue.org (Photo: DY)

In a plaintive commentary posted on Next Avenue earlier this year, Lizzy White writes about professional, middle-aged women who have lost their jobs and are struggling to make ends meet as they search for work:

She is in your friendship circle, hidden in plain sight.

She is 55, broke and tired of trying to keep up appearances. Faking normal is wearing her out.

To look at her, you wouldn’t know that her electricity was cut off last week for non-payment or that she meets the eligibility requirements for food stamps. Her clothes are still impeccable, bought in the good times when she was still making money.

To be sure, the effects of the economic meltdown that began some seven years ago continue to be felt by men and women in almost every income level and vocational category. But those of my generation (late Boomers in their 50s), and notably unmarried women within that group, have felt its impact especially hard, with livelihoods and careers interrupted or ended at what should be periods of peak earning potential. White continues:

She lives without cable, a gym membership and nail appointments. She’s discovered she can do her own hair.

There are no retirement savings, no nest egg; she exhausted that long ago. There is no expensive condo from which to draw equity and no husband to back her up.

Months of slow pay and no pay have decimated her credit. Bill collectors call constantly, reading verbatim from a script, expressing polite sympathy for her plight — before demanding payment arrangements that she can’t possibly meet.

White provides more facts and figures to document the income disparities and disproportionate caregiving responsibilities that often put women in a less advantaged position than their male counterparts. It’s an important piece, and the comments posted below it are worth reading as well, including those who rightly point out that middle-aged men who have experienced job losses are facing these circumstances, too.

This topic intersects with workplace bullying, because middle-aged workers endure a lot of it. When work abuse culminates in their termination or departure, they often face multi-level challenges in trying to pull themselves together and obtain new employment.

Two years ago, I summarized Workplace Bullying Institute instant poll results showing that workers in the 40s and 50s are frequent bullying targets. The poll asked visitors to the WBI website who have experienced workplace bullying to respond to a single question, “How old were you when the bullying at work began?” WBI collected 663 responses and reported the following:

Five years ago, I suggested that unmarried women may be specially vulnerable to being bullied at work, especially if they have kids:

Let’s start with the observation that truly abusive bullies often have a knack for sniffing out vulnerable individuals. Then we look at potential targets: Demographically speaking, is there any group more vulnerable than single women raising kids? They already are juggling work and caregiving, their schedules seem timed down to the minute, and not infrequently they are struggling financially — especially if there is no father in the picture.

Unmarried women without children may not be as economically desperate to hold onto their jobs, but they can be very vulnerable as well. Women in general remain underpaid compared to male counterparts. Those who came out of busted marriages may have re-entered the workforce later in life. In any event, they are less likely to have someone to fall back on if bullied out of a job.

Over the years, I’ve encountered many women in their 50s who have been bullied out of their jobs and then face the daunting challenges of recovering from the experience in terms of psychological well-being, employment, and personal finances. For those individuals, “faking normal” may require wearing a mask that feels like a heavy weight, in addition to carrying the burdens of their situations generally.

This makes for pretty unpleasant and unsettling reading, especially if you’re on the north side of 50. These challenges are hitting my generation of late Boomers especially hard.

Decades ago, many of us entered the workforce in the heart of a severe recession. At the same time, employers were cutting back or eliminating pensions and other benefit plans. For those going to school, loans were supplanting need-based grants and scholarships as the primary form of financial aid.

And now this group has experienced an even more severe economic downturn during the heart of what should be its peak earning years.

It distresses me greatly that we have not summoned the collective will to make this a major political and public policy issue. What will it take to make it so?