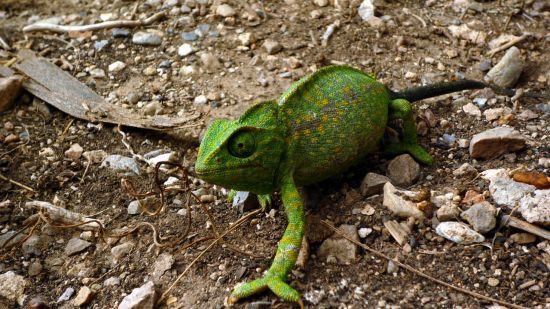 The workplace variety is not as cute (photo: Wikipedia)

Being able to adapt, change, and sometimes go with the flow can be a good trait to possess. After all, change is the only constant, right? Even Charles Darwin would tell us that species either adapt to the demands of their environments or disappear.

And so it goes at work, too. If we want to be good at our jobs, we must be able to deal with change. That includes dealing with a new boss or supervisor.

But what about that species of co-worker who is so able to turn her colors that she cannot be trusted? You know, the one who is so committed to surviving or getting ahead that she becomes a workplace chameleon, able to change hues in an instant.

I searched the term and didn’t find much out there. I did pull a 2001 CNN piece by Amy Erickson that referred to “(t)hose slippery workplace chameleons who seem to change and adapt their behavior for each boss, manager or situation.” The article cited to a study claiming that workplace chameleons don’t get ahead as often as we might think.

Regardless of whether they get ahead or simply stay around, workplace chameleons can do a lot of damage to others. Above all, they are in it solely for themselves. Many a workplace chameleon can morph into someone truly dangerous. Taking orders from above or cues from co-workers, this creature may engage in destructive and hurtful behaviors.

When acting at the behest of a toxic or bullying boss, the chameleon may claim that he is only “following orders.” However, he also may internalize some of that malicious energy and act accordingly. If new management arrives with (hopefully) a better set of ethics and morals, the chameleon may revert back to being a decent human being, especially if there’s something in it for him.

It’s not easy to spot a workplace chameleon, but once you see him change colors in ways that hurt others, you won’t forget him. Hopefully you will have kept a sufficient distance so as not to have been directly impacted by that transformation.