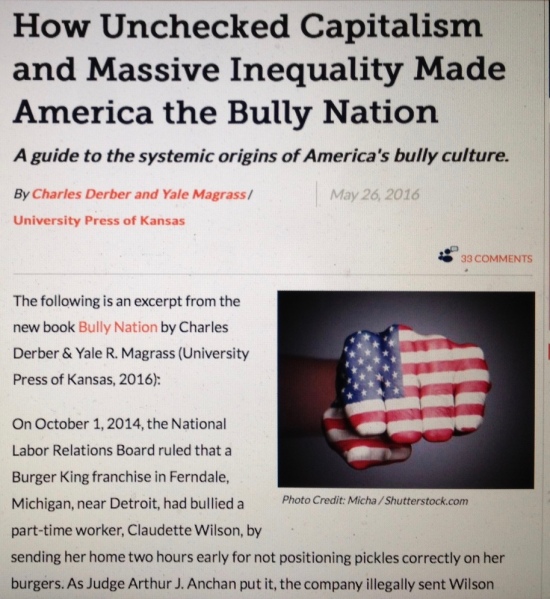 Bully Nation: How the American Establishment Creates a Bullying Society (2016) by sociologists Charles Derber (Boston College) and Yale R. Magrass (UMass-Dartmouth) takes a “big picture” look at how the economic Powers That Be have fueled a deeper, broader culture of bullying behaviors. Here’s part of an excerpt published on AlterNet,

Any economic or social system based on power inequality creates potential or latent bullying that often translates into active bullying, by institutions and individuals. So this is not a problem exclusive to capitalism; bullying was brutally manifest in systems claiming to be socialist or communist, such as the Soviet Union, and it is also obviously a major problem in China today. But capitalism is the dominant system currently and has its own, less recognized, institutionalized bullying propensities.

This looks like a promising book. Unfortunately, however, Drs. Derber and Magrass also take an unmerited swipe at the anti-bullying movement, by suggesting that we have failed to link bullying to the broader economic and political forces that frame their analysis:

Though the bullying of vulnerable kids in schools gets a lot of attention, the bullying of vulnerable workers usually is ignored. If the mass media mention it at all, they typically parrot the corporate view that the agitating workers are troublemakers who deserve punishment. The failure of scholars in the “bullying field” to see even illegal (not to mention legal) corporate threats, intimidation, and retaliation as bullying is another profound failure of the psychological paradigm that views bullying only as a “kid thing” in schools. Such scholars are blind to the adult and institutionalized bullying that is endemic to our economic system.

It appears that the co-authors neglected to do the necessary homework to learn more about the workplace anti-bullying movement. Indeed, the ongoing campaign to enact legal protections against workplace bullying has its philosophical roots in the value of employee dignity. In the law review article that led to my drafting of the Healthy Workplace Bill, “The Phenomenon of ‘Workplace Bullying’ and the Need for Status-Blind Hostile Work Environment Protection” (Georgetown Law Journal, 2000), I explore the social and economic conditions that are fueling bullying at work.

In addition, I connect the dots between the state of workers’ rights, employee dignity, and economic power in my 2009 law review article, “Human Dignity and American Employment Law” (University of Richmond Law Review, 2009). My 2014 blog post drawing from that piece stated:

American employment law has been dominated by a belief system that embraces the idea of unfettered free markets and regards limitations on management authority with deep suspicion. Under this “markets and management” framework, the needs for unions and collective bargaining, individual employment rights, and, most recently, protection of workers amid the dynamics of globalization, are all weighed against these prevailing norms.

Furthermore, we know darn well about the plutocratic forces that want to keep workplace bullying legal. Here in Massachusetts, a powerful corporate trade group, the Associated Industries of Massachusetts, has spearheaded opposition to the Healthy Workplace Bill. The Chamber of Commerce and the Society for Human Resource Management are among the other corporate friendly trade groups that have opposed employer accountability for severe workplace bullying.

This oversight aside, it appears that Bully Nation has the potential to raise our collective consciousness about how concentrated power is fueling abusive behaviors. I look forward to taking a closer look at it.

For a free subscription to Minding the Workplace, go to “Follow this blog” at the top right of the home page, and enter your e-mail address.