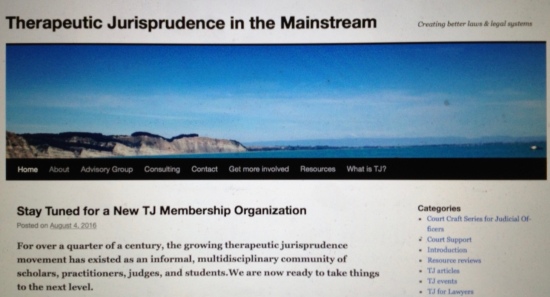 Regular readers of this blog may know that I am associated with therapeutic jurisprudence (TJ), a school of legal philosophy and practice that “concentrates on the law’s impact on emotional life and psychological well-being.” For some 25 years, TJ adherents have been creating a global network of scholars, practitioners, judges, and students. My own attraction to TJ arose out of my work on workplace bullying and my broader commitment to creating systems of employment law that embrace human dignity. TJ, I realized, was a natural match for those interests.

In fact, I am something of a full-on convert. I now believe that our legal system must, as a primary objective, embrace psychologically healthy outcomes in legal proceedings and transactions, while honoring other important political and economic concerns and core notions of rights and responsibilities.

Accordingly, I am working closely with a group of TJ-affiliated professors, judges, and lawyers to create an international, non-profit membership society that will build the therapeutic jurisprudence community and expand TJ’s scope and influence. We are looking at a 2017 organizational launch. Here’s a passage from a piece describing this effort that we just posted to the Therapeutic Jurisprudence in the Mainstream blog:

For over a quarter of a century, the growing therapeutic jurisprudence movement has existed as an informal, multidisciplinary community of scholars, practitioners, judges, and students. We are now ready to take things to the next level.

Plans are underway to create a new, international, learned society dedicated to TJ. This non-profit organization will consolidate many existing TJ activities, support new TJ initiatives and programs, and serve as a virtual gathering place for those interested in advancing TJ as an important school of legal philosophy and practice.

The new TJ society will be a lean operation, built on modest membership fees and a simple organizational structure, with its eyes trained on facilitating and supporting good works rather than getting overly caught up in internal machinations.

Many details have yet to be settled, and many individuals have yet to be contacted. However, the TJ society will hold its opening event at the July 2017 Congress of the International Academy of Law and Mental Health, to be held in Prague. This will include a substantial, participatory roundtable discussion about initial plans for the organization, followed by a luncheon for those who would like to commemorate this very promising new venture.

This is a very exciting development, and during the coming months I will be sharing occasional updates about this initiative.

Can a quirky band of law professors, lawyers, and judges transform the law and legal profession? (2015)

A view from Vienna: New wine and new bottles for the practice and substance of law (2015)

Visioning law and legal systems through a psychologically healthy lens (2014)

I’ve written several law review articles that incorporate insights from TJ, and you may freely download pdf copies by clicking the links: