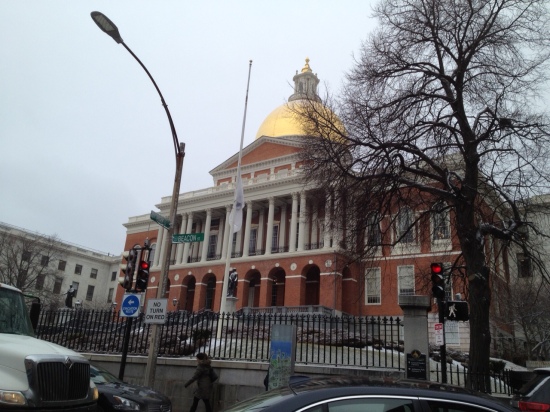 Massachusetts State House: State-level advocacy is where it’s at

In the aftermath of the Trump victory, management-side employment lawyer Richard Cohen authored a piece for the popular Above the Law site, speculating on how the November election result will impact efforts to enact workplace bullying laws:

With the incoming Bully-in-Chief not known for his care and feeding of the weak or vulnerable, what will become of the movement against workplace bullying, which had been gathering steam? Will it go the way of Melania and disappear from view? . . .

. . . But despite the need for and desirability of anti-bullying laws, I am afraid that they will wither on the vine – for now.

Cohen’s final verdict on prospects for enacting workplace bullying legislation is a firm no, “(a)t least for four more years.”

Cohen’s conclusion no doubt reflects a good chunk of the conventional wisdom. I’ve even heard it from some of our Healthy Workplace Bill supporters, and it is posing challenges in revving up grassroots support for our latest bill filings in new sessions of state legislatures. To be sure, the political and emotional ripple effects of the Trump victory appear to have validated bullying behavior more than the anti-bullying movement.

But hold on a minute. I’d like to offer four reasons why we cannot pick up our marbles and go home, assuming we’ll have no impact of success:

First, advocacy efforts for the Healthy Workplace Bill have been, and obviously now will continue to be, concentrated at the state levels. The political machinations of a given state are often distinct from what’s happening at the national level.

Second, we have had concrete successes, despite Cohen’s claim that our efforts have been futile. In recent years, California, Tennessee, and Utah have joined various municipalities in enacting workplace bullying laws and ordinances, drawing largely from the language of the Healthy Workplace Bill. These measures have fallen short of providing comprehensive legal protections against severe work abuse — mostly dealing with adopting policies and providing in training — but they are a start.

Third, the workplace anti-bullying movement has proven itself to be something of a bi-partisan cause. True, Donald Trump and his close partisans are not going to be advocating for the Healthy Workplace Bill or anything close to it. In fact, his nominee for Secretary of Labor, Andrew Puzder, is a fast-food company CEO who is not big on supporting workers’ rights. Nevertheless, over the years many Republicans have supported efforts to enact workplace bullying legislation.

Fourth, even if prospects for passage of workplace bullying laws are dimmed in view of current national outlook, the secret to success in legislative advocacy at the state level (or any level, for that matter) is perseverance. Legislative advocacy often has a cumulative effect. Even though the process requires us to re-file the Healthy Workplace Bill for each new session, collective memories of public support help to fuel current efforts.

Our time on this is coming. Trump’s victory may make the task harder, but we still have every reason to keep forging ahead with our efforts.

An important sidebar: I want to clarify a point that might be implied from Cohen’s piece. Though I agree with his observation that Donald Trump is hardly a friend of the weak or vulnerable, this should not translate into the assumption that targets of workplace bullying necessarily fall into those categories. Oftentimes those targeted for bullying or mobbing are temperamentally strong individuals, at least before the abuse started. This is in sharp contrast to stereotypical scenarios of schoolyard bullying or cyberbullying of kids. For better or worse, it’s much harder to develop an easy profile of who might be targeted at the workplace.

Massachusetts residents: To connect with the MA advocacy campaign for the Healthy Workplace Bill, go to the campaign webpage or Facebook page. We’re in the process of recruiting co-sponsors for the new legislative session, so please get involved now!

Other supporters: The national HWB campaign page is here.