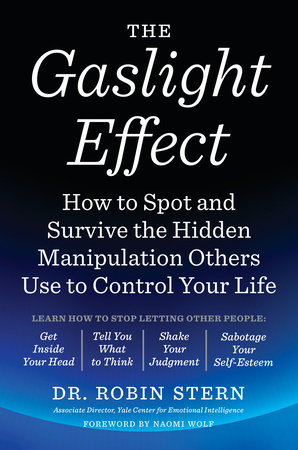 Dr. Robin Stern’s The Gaslight Effect: How to Spot and Survive the Hidden Manipulation Others Use to Control Your Life, first published in 2007, has just been reissued in paperback for 2018 with a new Introduction. Especially for those interested in more manipulative forms of workplace bullying and abuse, this is a very useful and important book.

a type of emotional manipulation in which a gaslighter tries to convince you that you’re misremembering, misunderstanding, or misinterpreting your own behavior or motivations, thus creating doubt in your mind that leaves you vulnerable and confused. Gaslighters might be men or women, spouses or lovers, bosses or colleagues, parents or siblings, but what they all have in common is their ability to make you question your own perceptions of reality.

According to Stern, gaslighting is a “mutually created relationship” involving a gaslighter who wants “the gaslightee to doubt her perceptions of reality,” and a gaslightee who is “equally intent on getting the gaslighter to see her as she wished to be seen.”

For those who are new to the term, gaslighting draws its inspiration from a 1944 film, “Gaslight,” in which a husband is trying to drive his wife insane, including the periodic dimming of gaslights in a house where her aunt was murdered years before.

Stern has played a major role in popularizing the concept of gaslighting, with her main focus being on such behaviors in interpersonal relationships, especially as experienced by women. This emphasis remains in the re-issued edition, but the new Introduction explains how gaslighting is now being applied to additional scenarios, including bullying. In fact, I was flattered to read a reference to this blog:

Meanwhile, an increasing number of blogs linked gaslighting to bullying, both in personal relationships and at work. “Is gaslighting a gendered form of workplace bullying?” asked David Yamada on his blog, Minding the Workplace, while numerous dating and self-help blogs talked about the importance of identifying and standing up to your gaslighter.

I’m happy to recommend The Gaslight Effect. In addition, you can check out past blog posts about gaslighting at work and in society:

Is gaslighting a gendered form of workplace bullying? (2013)

Gaslighting as a workplace bullying tactic (2012)