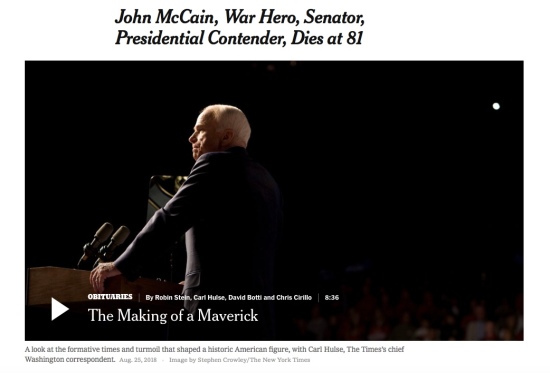 Here in America, the death of U.S. Senator John McCain is dominating the news, and rightly so. He has been a major political figure for several decades, marked by a penchant for outspokenness and independence that formed his trademark public image. Most of the McCain remembrances are looking at the broad arcs of his life and career, but upon reading Robert D. McFadden’s feature-length obituary for the New York Times, another thing hit me: He was a trauma survivor.

It’s a well-known part of McCain’s story that he survived more than five years as a POW during the Vietnam War. McCain was a fighter pilot, and during a mission over Hanoi in July 1967, his plane took a missile hit. He managed to eject, but he suffered two broken arms and a shattered knee in the process. He was quickly captured by the North Vietnamese, who immediately set upon him. McFadden writes:

Mr. McCain was stripped to his skivvies, kicked and spat upon, then bayoneted in the left ankle and groin. A North Vietnamese soldier struck him with his rifle butt, breaking a shoulder. A woman tried to give him a cup of tea as a photographer snapped pictures. Carried to a truck, Mr. McCain was driven to Hoa Lo, the prison compound its American inmates had labeled the Hanoi Hilton.

There he was denied medical care. His knee swelled to the size and color of a football. He lapsed in and out of consciousness for days. When he awoke in a cell infested with roaches and rats, he was interrogated and beaten. The beatings continued for days. He gave his name, rank and serial number and defied his tormentors with curses.

After two weeks, a doctor, without anesthesia, tried to set his right arm, broken in three places, but gave up in frustration and encased it in a plaster cast. He was moved to another site and tended by two American prisoners of war, who brought him back from near death.

This was only the beginning of years of continuous torture and beatings, including two years of solitary confinement.

McCain had chances for early release, thanks to his father’s status as a high-ranking U.S. Navy admiral. He refused:

When Admiral McCain became the Pacific Theater commander…, his son was offered early repatriation repeatedly. Commander McCain refused, following a military code that prisoners were to be released in the order taken. He was beaten frequently and tortured with ropes.

(Think about it: How many of us would decline repeated chances to jump the line while facing ongoing torture?)

With the Vietnam War coming to an end, McCain was finally released in March 1973. After a long convalescence, he would return to active duty in the Navy. Eventually, of course, he decided to enter politics.

When John McCain was convalescing from his years as a POW, our knowledge of psychological trauma was in its infancy. Among other things, Post-Traumatic Stress Disorder would not enter the psychiatric nomenclature until the 1980s — informed strongly by the experiences of Vietnam veterans.

Thus, it’s fair to surmise that much of the focus of McCain’s recovery was on his physical health. But make no mistake about it, he was also a trauma survivor. Despite the horrific physical and psychological abuse that he endured as a POW, he would go on to lead a full and rich life, including long, distinguished service as a U.S. Senator and the Republican Party nomination for President in 2008.

It is worth noting that throughout his political career, McCain was an outspoken critic of the use of torture tactics to interrogate prisoners and those suspected of engaging in terrorist activities. This criticism did not sit well with many people during the post-9/11 era, but McCain persisted. He knew damn well what it felt like to be on the receiving end.

Standing up to a bully at the U.S. Naval Academy

Stories of McCain’s rebellious streak at the U.S. Naval Academy are apparently the stuff of legend. He piled up a mountain of demerits and disciplinary measures as he resisted the strictures of officer training. Tucked into that colorful history of barely escaping expulsion is a story of standing up to bullying, as recounted in an Arizona Republic profile of McCain by Dan Nowicki and Bill Muller:

It’s 1955 in Annapolis, Maryland, and Midshipman John McCain and his roommate, Frank Gamboa, were eating lunch at the mess hall at the U.S. Naval Academy. A first class man, a “firstie” in Navy parlance, began dressing down a Filipino steward.

Gamboa hardly noticed the exchange, but young John McCain was paying close attention. Since the steward was an enlisted man, he couldn’t fight back. The firstie was being a bully, a no-no at the Naval Academy.

The man outranked everyone at the table. McCain and Gamboa were barely past being plebes, the school’s lowest rank. Fearing trouble, other underclassmen ate quickly and left. The browbeating continued.

Finally, McCain could take no more.

“Hey, why don’t you pick on someone your own size?” McCain blurted.

There was a moment of silent shock at the table.

“What did you say?” replied the firstie.

“Why don’t you stop picking on him?” McCain said. “He’s doing the best he can.”

“What is your name, mister?” snapped the firstie, an open threat to put McCain on report.

The firstie saw the look in McCain’s eyes. And fled.

Today we’d call it “bystander intervention.” Back then it was simply standing up to a person who is picking on someone else. I don’t know if McCain’s life story includes other instances of intervening in bullying situations, but this one account shows that even as he resisted the disciplinary conventions of Naval Academy training, he was guided early on by something more than simple youthful rebelliousness.

Surviving severe, ongoing abuse. Recovering from that abuse to lead a full, meaningful life. Standing up to a bully on behalf of someone being targeted.

Regardless of our respective political beliefs, there’s something that we all can learn from these chapters of John McCain’s story.