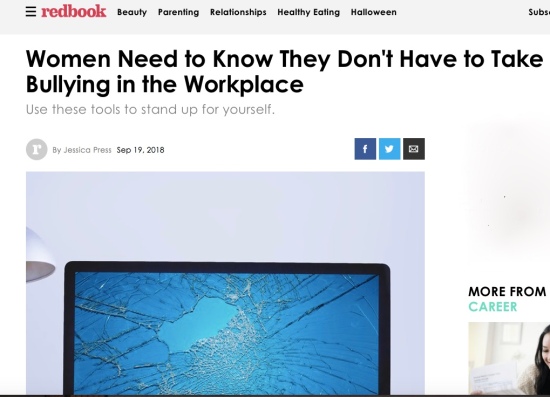 Writer Jessica Press was caught by surprise. When she posted to social media that she was looking for stories from women about their experiences of being bullied at work, she expected a sprinkling of replies. Instead, as she recounts in the lede to her feature article appearing in Redbook magazine’s October issue, she got a deluge:

My inbox was flooded — overflowing with incoming mail. I’d put out the call to a handful of experts and Facebook groups for women’s stories of workplace bullying. I thought perhaps I’d hear from a dozen women.

Instead, within a week, nearly a hundred stories from around the country and around the world poured in, with a steady stream continuing in the days and weeks that followed. They worked in hospitals, academia, sales, food service — anywhere and everywhere. There were women still living in fear of retaliation. There were those who shared their journeys of deteriorating marriages, depression, anxiety, and PTSD-like symptoms. There were a surprising number who had involved lawyers and were limited in what they could even reveal due to nondisclosure agreements.

It’s a substantial feature article, and I suggest giving it a full read. Among those interviewed was Deb Falzoi, one of the key advocates for the anti-bullying Healthy Workplace Bill here in Massachusetts:

“Every day I would come to work feeling like, What is she going to do today? remembers Deb Falzoi. “Now that I know the ways bullies work, I realize she was very textbook. There were false accusations, removal of my responsibilities. At the time I didn’t know what to call what was happening to me. When I finally found the term ‘workplace bullying’ and saw that there was research on the issue, I felt a sense of relief. I hear that same thing from other targets.”

Press also gives a shout-out to our national campaign to enact the Healthy Workplace Bill:

[Drs. Gary] Namie and his wife, Ruth, the cofounder of [the Workplace Bullying Institute], along with David Yamada, professor of law and director of the New Workplace Institute at Suffolk University Law School in Boston, are leading a movement to pass the Healthy Workplace Bill, which Yamada wrote. The bill would give both workers and employers clear-cut rights and clearly defined boundaries, which are of course the basis of any healthy relationship, professional or otherwise. “It provides an incentive for employers to adopt reasonable steps to prevent and correct bullying, which translates to having a policy and faithfully enforcing it,” explains Namie.

What’s the significance of Redbook doing a feature piece on the bullying of women at work?

I think it’s another important sign of the mainstreaming of workplace bullying and mobbing behaviors as topics worthy of our close attention. After all, Redbook is a long-time, monthly lifestyles magazine marketed primarily to women, with a circulation of some 2.2 million. That’s a sizable readership.

This is akin to the Boston Globe‘s front page feature on workplace bullying that appeared at the turn of the year.

These articles are an important form of public education about work abuse. And especially for those who are targeted by these behaviors, they serve an informative and validating purpose that helps them understand what they’re experiencing. I hope we see a lot more coverage like this.