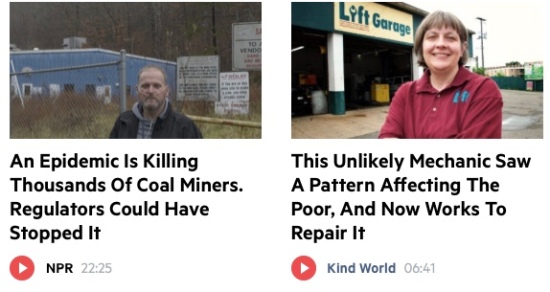 On Tuesday morning, two segments on WBUR-FM, Boston’s NPR news station, reminded me of how we can bring our best or worst selves to work. I’m going to start with the bad story so we can save the good one for last.

The first story reports on an investigation of how federal mine safety regulators failed to take action on toxic levels of mine dust exposure facing coal miners in Appalachia. Consequently, thousands of them are suffering from advanced black lung disease. Many will die from it, and some at relatively young ages. From the NPR piece:

A federal monitoring program reported just 99 cases of advanced black lung disease nationwide from 2011-2016. But NPR identified more than 2,000 coal miners suffering from the disease in the same time frame, and in just five Appalachian states.

And now, an NPR/Frontline analysis of federal regulatory data — decades of information recorded by dust-collection monitors placed where coal miners work — has revealed a tragic failure to recognize and respond to clear signs of danger.

For decades, government regulators had evidence of excessive and toxic mine dust exposures, the kind that can cause [black lung disease], as they were happening. They knew that miners . . . were likely to become sick and die. They were urged to take specific and direct action to stop it. But they didn’t.

One expert described black lung disease as “suffocating while alive”:

This advanced stage of black lung leaves lungs crusty and useless, says Dr. Robert Cohen, a pulmonologist at the University of Illinois, Chicago who has spent decades studying black lung and PMF disease.

“You have a much harder time breathing so that you can’t exercise,” Cohen noted. “Then you can’t do some simple activities. Then you can barely breathe just sitting still. And then you require oxygen. And then even the oxygen isn’t enough. And so … they’re essentially suffocating while alive.”

The NPR report shares individual stories of miners suffering from the disease and goes into detail about the federal bureaucratic failures to act upon mounting evidence of the deadly risks posed.

Helping the poor repair their cars

The second story is about Cathy Heying of Minnesota, who has devoted herself to helping poor and homeless individuals. In her work, she noticed that the people she helped often couldn’t afford the necessary upkeep and repairs on cars that helped them to survive:

“Often the story was, ‘I have this car. It desperately needs brakes. I have a job, but my job is 30 minutes away. And I work second shift, and there’s no bus when I get off at night,’ ” says Cathy. “This car was the linchpin holding everything together, and you pull that pin and everything falls apart.”

Ms. Heying decided to open her own auto shop to help these people. The only problem was that she didn’t know much about repairing cars. So she went to auto mechanic school. At age 38 she was the oldest person in her class and one of three women in a group of 40.

In 2013, Heying opened the Lift Garage, a non-profit auto repair shop for people who cannot afford to pay commercial rates to fix their cars:

It has one car lift, one repair bay and a small volunteer staff.

Cathy’s clients, who all live at or below the federal poverty level, pay for parts at-cost and about $15 per hour in labor costs. The average price for a mechanic in the Twin Cities area is around $100 per hour.

Heying laments that demand for their services far exceeds the available resources, resulting in a three-month waiting list. Still, she knows that they are making a difference to their customers.

Dignity work: A study in contrast

Last month, I posed the term “dignity work” and suggested two meanings for it:

First, we can look at dignity work through a lens of whether the core qualities of our labors — paid, unpaid, and volunteer alike — affirm, support, or advance human dignity.

Second, we can look at dignity work through a lens of whether we, as individuals, conduct ourselves in ways that affirm, support, or advance human dignity.

The mine safety regulators and Cathy Heying were in positions to embody both definitions. The regulators failed on both counts, while Heying embodied the concept of dignity work.

In that November post, I observed that “opportunities to engage dignity work are all around us. We have choices.” Amen.