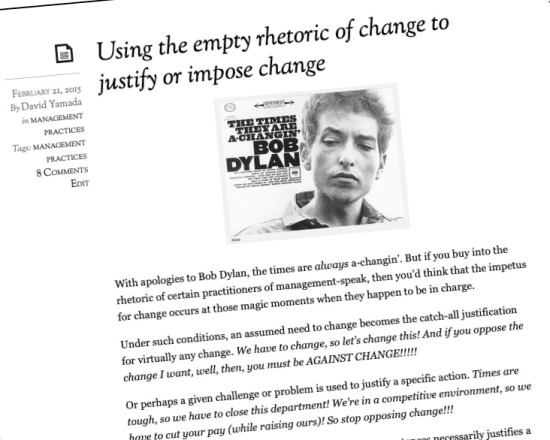 Hello dear readers, over the life of this blog, I’ve sometimes taken aim at certain popular management practices. Here’s a roundup of some of my favorites:

Using the empty rhetoric of change to justify or impose change (2015) (link here) — “With apologies to Bob Dylan, the times are always a-changin’. But if you buy into the rhetoric of certain practitioners of management-speak, then you’d think that the impetus for change occurs at those magic moments when they happen to be in charge.”

“Strategic planning”: All too often, a time-sucking bridge to nowhere (2011) (link here) — “My friends in management consulting may toss me out of the visitor’s lounge for saying this, but two words uttered together send a chill up my spine: Strategic planning. . . . Organizations should engage in smart, inclusive planning and evaluation. But there’s something about mega-processes like strategic planning that often do neither.”

Time wasters from top management (2017) (link here) — “Consultant Eric Garton, writing for the Harvard Business Review, posits that various time killing practices imposed from on high undermine employee morale and productivity…. These ‘practices, procedures, and structures’ include ‘too much process, too many meetings, meaningless goals, and time wasted on work that no one will ever care about.’”

If you work in higher education, beware the C word (2015) (link here) — “If you work in higher education as a professor, staff member, or low-to-mid level administrator, pay attention if you hear some variation of the following coming from the top: We’re bringing in XYZ Consulting to help with strategic planning and to assess what changes we need to make in order to survive/thrive/rightsize/move up in the rankings.”

Consultants and the “outsourcing of leadership” (2014) (link here) — “Take a look around your workplace. Are there consultants buzzing around, addressing practically every major pending concern or decision your organization faces? If the answer is ‘yes,’ then it’s likely that your employer is engaging in what a friend of mine brilliantly calls the ‘outsourcing of leadership.’”

One-way feedback: In-house employee surveys and the illusion of open decision making (2012) (link here) — “But hold on. Frequently these surveys are done with an underlying agenda, usually one that seeks validation for an already favored course of action. (A telltale sign is when obvious choices or answers are not provided as response options, or when the survey is framed to exclude entire points of view.)”

When the stock market crashed in 2008 and the world of high finance took a tremendous hit, the U.S. federal government came along and gave huge bailouts to Wall Street and its siblings. Most experts agrees that these dramatic moves were necessary in order to save the nation’s financial infrastructure.

Today, small businesses, non-profits, and individual employees are among those taking the hardest hit, as the economy essentially goes into quarantine due to the coronavirus/COVID-19 crisis. A lot of folks are understandably fearful about what their companies, organizations, and personal finances will look like during the weeks and months to come.

I’m not a public health expert, but drawing upon the mountain of information and commentary available, it appears that we’re at least a year away from widespread availability of a vaccine. In the meantime, a lot of very smart people are trying out different treatment approaches, but there’s no magic bullet for now. As I see it, this uncertainty is very likely to continue into next year.

All of which suggests that our elected and appointed officials, and other leaders in the business and non-profit sectors, must lead with a commitment to create a stronger social safety net and support for rebuilding businesses and organizations — while our medical and scientific communities work on treatments and vaccines that I’m confident we’ll eventually have to blunt this virus. It would help a lot if those promises — however unsupported by details at this moment — were made now, in order to soothe some of the anxiety and sadness that we’re already seeing. 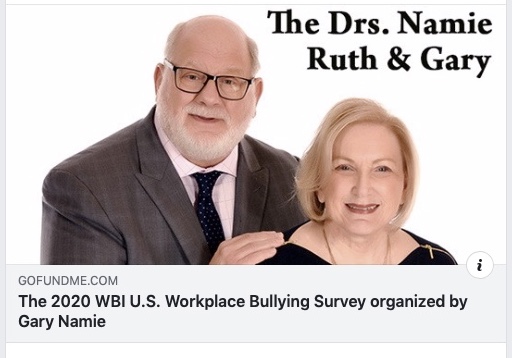 One of the most important sources of information about the frequency, severity, and demographics of workplace bullying in the U.S. is the Workplace Bullying Institute’s periodic scientific national surveys. Designed by WBI director Gary Namie in conjunction with a national polling firm, these authoritative, carefully designed surveys are regularly cited by the news media and by researchers.

Dr. Namie is planning the next survey. Even with a generously discounted rate, these surveys cost money, so WBI is launching a crowdfunding campaign to help cover the expenses. I am happy to be among the donors, and if you can afford it, I hope you’ll join in. Please go here to support the 2020 survey through GoFundMe. 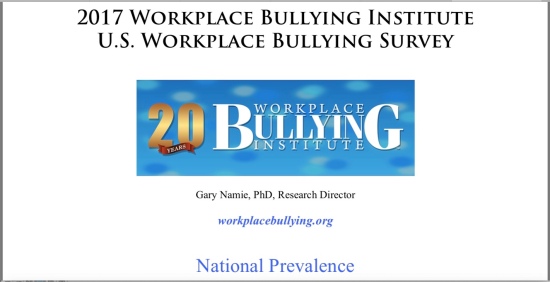 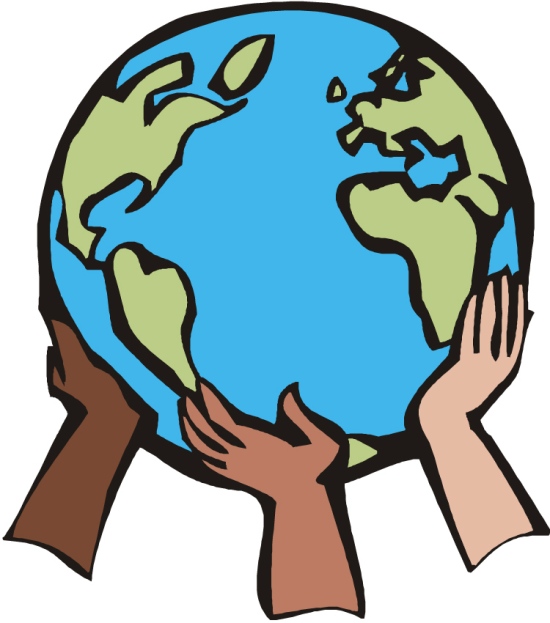 Dear Readers, for the past few days I’ve been mulling over what to write about the coronavirus (COVID-19) situation and its relation to the everyday experience of work.

But as I took sparsely populated Boston subway trains to and from my university office today, I realized that all I wanted to say is that we need to be kind to each other during this challenging and scary time.

To offer a few examples: If folks are starting to work from home, please make an extra effort to express appreciation to those who must show up to work because they have no other choice. If you do patronize a business where workers rely on tip income, be generous if you can afford it, because it’s likely that they’re hurting. And by all means, please don’t hoard supplies of paper goods, food, hand sanitizer, and whatever.

Life can be hard enough without a pandemic hanging over our heads. Hopefully we can minimize the impact of this virus while holding on to our best selves. 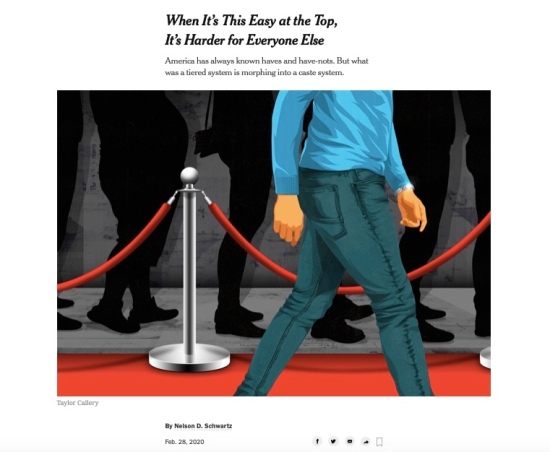 The next time someone tells you that the U.S. economy is going great — regardless of their political affiliations — you might suggest that they dig beneath the misleading surface of a low unemployment rate and (at least pre-coronavirus) a bubbling stock market. In reality, there are two economies at play in modern America, one for a narrow slice of the very well-to-do, and another for the rest of the populace.

In a piece for the New York Times (link here) Nelson D. Schwartz calls it the “velvet rope economy,” borrowing from the title of his new book, The Velvet Rope Economy: How Inequality Became Big Business (2020).

Whatever the arena — health care, education, work, leisure — on one side of the velvet rope is a friction-free existence. Red tape is cut, appointments are secured, doors are opened. On the other side, friction is practically the defining characteristic, with middle- and working-class Americans facing an increasingly zero-sum fight for a decent seat on the plane, a college scholarship, even a doctor’s appointment.

There has always been a gap between the haves and have-nots, but what was a tiered system in America is morphing into a caste system. As the rich get richer and more businesses focus exclusively on serving them, there is less attention and shabbier service for everybody who’s not at the pinnacle.

A tiered system, to borrow from Schwartz, implies at least some ability to move up. A caste system, however, suggests being stuck in place. But maybe there’s more room for movement in the U.S. system than we think. The problem is, these days it’s very likely to be downward.

For evidence of that, check out the facts, figures, and stories behind those workers who lost jobs and careers in the wreckage of the Great Recession and never found work at their previous income levels. For example, Elizabeth White’s important book, 55, Underemployed, and Faking Normal (2019), which I discussed last year (link here), chronicles that dynamic and provides advice and support for those dealing with these circumstances.

Much has been written about the widening U.S. earnings and wealth gap. For a snapshot view, take a look at the Social Security Administration’s aggregate wage data, based on taxable wages for 2018 (link here) — the most recent year available:

And as this 2018 Business Insider piece by Hillary Hoffower shows (link here), even in cities where the median income is higher, typical middle-class living expenses far exceed those averages.

America faces a significant retirement funding crisis. I’ve been beating this drum for over 10 years on this blog, in concert with many others. Things are not getting appreciably better.

Labor economist Theresa Ghilarducci (New School for Social Research) is one of the nation’s leading experts on retirement funding and policy. She wrote in 2019 (link here):

The bottom line is that Americans do not have enough retirement savings. This is not because we drink too many lattes, as financial writer Helaine Olen has argued for many years, but because employers and workers are not required to contribute to retirement savings plans above and beyond Social Security. Many low-income workers once had some retirement security; janitors and ladies garment workers weren’t rich, but they had pension plans at work. Some gig workers, like job-to-job carpenters, also had pensions when they were in a union. What we need today is a portable universal pension system that supplements Social Security.

As last week’s stock market drop precipitated by fears of a coronavirus global public health crisis illustrated, all it takes is one big scare to drive down values fast. Unfortunately, the trickle-down effects could reach even those who do not have much money, if at all, invested in stocks. Earlier this week, I was quoted by the Law & Crime site in a piece by Colin Kalmbacher on the potential employment implications of the coronavirus situation (link here). Among other things, I projected some of the long-term impacts if there are severe outbreaks in the U.S.:

“But in terms of how this affects the typical at-will employee, so much depends on how serious this turns out to be regarding both public health and economic impacts. Obviously if huge swaths of the workforce are infected with the virus, it will affect staffing and productivity wherever there’s a serious outbreak. Furthermore, if this reaches pandemic levels that trigger a 2008-style recession, then we could see layoffs in business sectors that are hardest hit. This would later trickle down to public sector and non-profit employment, as we saw with the Great Recession.”

In sum: At least since the early 1980s, our economy has become one of (1) flattening wages; (2) widening wealth gaps; and (3) reduced and eliminated employee benefits, especially retirement plans.

Ultimately, this understanding should translate into decisions we make at the ballot box. I hope folks keep these trends in mind during a 2020 election season that already looks to be short on facts and long on spin & lies. Hopefully there will be no velvet rope line when we show up to vote. 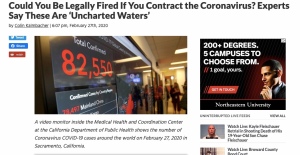