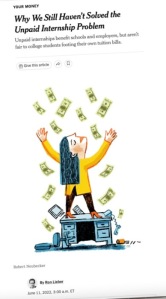 A welcomed, if long overdue announcement from the White House and an excellent New York Times article have brought important questions about unpaid internships back into the spotlight.

Last week, the Biden Administration issued a statement (link here) announcing that, starting this fall, its interns no longer will have to work for free. This is the first time in the history of this coveted opportunity that interns will be paid, thus opening the door to highly qualified applicants who come from modest financial means. Said the White House:

Too often, unpaid federal internships have been a barrier to hardworking and talented students and professionals, preventing them from contributing their talents and skills to the country and holding them back from federal career advancement opportunities. This significant milestone of paying White House interns will help remove barriers to equal opportunity for low-income students and first-generation professionals at the beginnings of their careers and help to ensure that those who receive internships at the White House—and who will be a significant part of the leadership pipeline across the entire federal government—reflect the diversity of America.

On the heels of the White House announcement comes “Why We Still Haven’t Solved the Unpaid Internship Problem” (link here), a very informative and wide-ranging piece on the barriers posed by unpaid internships, authored by Times personal finance writer Ron Lieber. He draws upon his own experience back in the 1990s to illustrate the key issue:

Millions of college students work for money each summer because they need it and their financial aid office tells them to go earn some. Then there are those White House interns from previous administrations — often white, sometimes rich and, by summer’s end, presumably very well connected — buffing their résumés.

Is the problem evident? It first clicked in for me in the early 1990s when my interview for a summer internship at Chicago magazine was going well until I found out that I’d be working for free.

When I started asking questions — what was a financial aid recipient like me supposed to do to make enough to afford school, and isn’t this all a form of classism? — the tenor of the meeting took a turn. I didn’t get the offer.

Paying tuition to work for free

Lieber asked me to comment on the exploitative practice of colleges and universities offering academic credit for internships in return for paying tuition:

Then there’s the glaring issue of schools that offer course credit for internships.

Schools benefit from this arrangement in two ways, said David C. Yamada, a professor at Suffolk University Law School in Boston and an expert on the rules around internships. First, intern-for-credit programs can allow institutions to collect tuition for that credit, even as students are working out in the world and don’t need classroom space or an instructor standing in front of it for four months.

Then, it allows a school to say it’s providing valuable career preparation. “If I hear another university invoke the phrase ‘Hit the ground running,’ I think I’m going to scream,” he said.

I have written often on this blog about the intern economy, especially during a period several years ago, when the issue was getting lots of media attention due to lawsuits invoking minimum wage laws to challenge the widespread practice of unpaid internships. Those legal challenges yielded some disappointing court decisions but kept open the possibility of future lawsuits. They also served a valuable consciousness-raising function that caused some employers to reconsider their internship programs and begin paying their interns.

But the overall topic has faded from public view since then. I hope that the White House pronouncement and Ron Lieber’s article will help to remedy that and prompt a resurgence of attention.

I have written several law review articles examining the legal and policy implications of unpaid internships. You may freely access pdfs of those pieces:

Update: I was interviewed by KCBS news radio in San Francisco about the recent White House announcement that it will begin paying its interns. You may listen to that brief interview here.