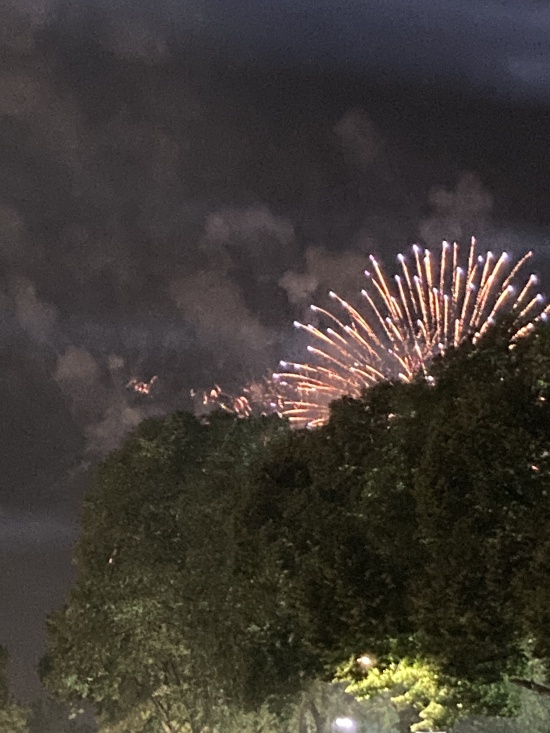 Peeking from behind the trees, fireworks from the Boston Pops annual July 4 celebration

Yesterday, for the first time in my 28 years in Boston, I did the famous Boston Pops July 4 celebration. I’ve never been one for big crowds, but a visit from friends who wanted to experience this Boston tradition overcame my resistance. Because we opted not to do the early a.m. campout, we didn’t get in front of the bandshell, but we found a place on an adjacent Beacon Hill street where we could hear the music, peer onto the stage, and see the fireworks bursting from behind the trees. It was great fun.

Before we reached the July 4 celebration, we passed by the National Park Service monument paying tribute to the storied 54th Massachusetts Regiment, one of the first regiments of African American soldiers during the Civil War. There we talked to a Civil War re-enactor who was in full uniform. He explained to us with pride in his eyes that his family tree includes a member of that regiment, and he demonstrated the nine-step process of loading a rifle of that era. It was a wonderfully educational and heartfelt conversation.

All in all, this was a triumphant and festive day for my home city, the return of a holiday tradition that had been cancelled during the past two July 4ths due to the pandemic.

When the Boston Pops Orchestra played its medley of patriotic songs, however, I found myself getting emotional over our nation’s current state of affairs. I now live in a country as deeply divided as I’ve ever seen. And those divisions are unlikely to heal anytime soon.

The nation’s July 4 festivities were horribly savaged by news from Highland Park, Illinois — a suburb of Chicago — of a mass shooting at the town’s Fourth of July parade that left at least six people dead and over 30 injured. A suspect, a 22-year-old white male, was later peacefully taken into custody.

The city of Akron, Ohio, canceled its July 4 events in the face of weekend protests after its police department released body camera footage of up to eight officers shooting Jayland Walker, a 25-year-old African American male, some 60 times. Walker was not armed at the time he was killed.

Even here in Boston, our holiday weekend was stained by a march of masked white supremacists through the downtown. (Going back to the 1800s, these folks insist on covering their faces.)

On a national scale, the Congressional committee investigating the January 6, 2021 storming of the U.S. Capitol is accumulating more and more evidence that ties the event and participants’ insurrectionist intentions directly to former president Trump. The most damning testimony is coming from his own former staff and other longtime conservative Republicans, many of whom have stated that the election was not stolen and said that they shared this conclusion with Trump. The hearings have also revealed that several of Trump’s strongest supporters in Congress sought pardons in connection with Jan. 6, in anticipation of possible criminal prosecution.

Perhaps the most divisive recent development was last week’s decision by the U.S. Supreme Court to end a long-held right to abortion. The court’s holding, in turn, triggered a wave of red state laws prohibiting abortions, even in the case of rape or incest. (In fact, on CNN the other day, South Dakota governor Kristi Noem repeatedly dodged a question about whether a 10-year-old rape victim — an actual situation in Ohio — should be forced to give birth.)

The behaviors and actions I’m witnessing run counter to the kind of peaceful, ethical, and inclusive nation that I wish to see. I never thought that I would say this during my lifetime, but our American Experiment in freedom and democracy is at greater risk than at any time since the Civil War. The Stars and Stripes may fly forever, but what they represent is increasingly up for grabs.