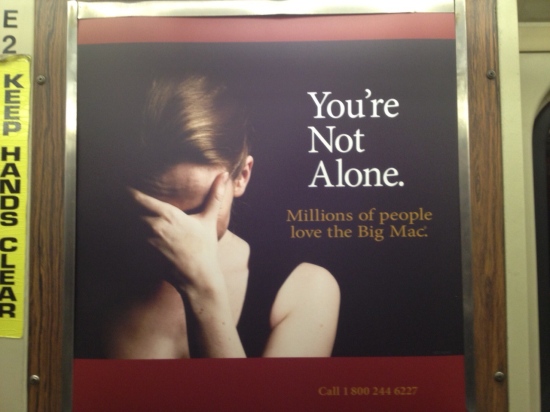 From the Orange Line, Boston subway (photo by DY)

Here’s the ad I saw while riding the Orange Line of the Boston subway on Sunday: It features a woman looking down with her head buried in her hand, with the text including (1) a large main caption “You’re Not Alone,” (2) a much smaller caption “Millions of people love the Big Mac,” and (3) an 800 phone number at the bottom. (Yes, I called it. It’s McD’s corporate phone number.)

I don’t think I’m being oversensitive or too “PC” about this. If you ride the subway regularly, you often see public service ads depicting a person in obvious distress, captioned with a few supportive words, and listing a phone number to reach a sympathetic ear. We’re living in difficult times. There are a lot of people who are struggling with their mental and emotional health. They may be highly stressed out, depressed, or even suicidal.

The ad writers and executives in McDonald’s high-priced marketing operation missed the boat badly on this one. I’m sorry, but the ad is just too close to the real thing to be funny.

April 10 update: McDonald’s has responded by saying this was part of an ad campaign that never got formal approval from corporate central, and they’ve ordered the ads pulled. Details here from Eric Randall at Boston Magazine, who has been following the story. (It sounds like McD’s will be be revisiting their protocols in working with advertisers because of this.)

At this point I’m a little bemused by how this story has turned mini-viral. Popular Boston blog Universal Hub and Time magazine’s Brad Tuttle also picked up the story, and I had to decline an interview with Boston’s Channel 5 News because I’m out of town.

I deliberately tried to write the post in a way that was pointed but non-inflammatory, so it’s quite interesting to see how something like this grows legs.

April 11 update: And the Boston Business Journal‘s Galen Moore pulled the story together, including more about the Arnold advertising firm apparently responsible for the snafu.

April 12 update: To my surprise, the story has gone viral, with coverage ranging from ABC News to the Daily Mail over in the U.K. In addition, the mental health community has been weighing in. Here’s the lede from Marie Szaniszlo’s piece in the Boston Herald:

Mental health advocates yesterday blasted a McDonald’s ad on the MBTA that appears at first to be a public service announcement targeting people suffering from depression.

“It’s really too bad because it trivializes the whole issue of depression,” said Julie Totten, executive director of Waltham-based Families for Depression Awareness, which has been running an ad of its own on the T for its Strides Against Stigma Walk on April 27 at Boston University. “We’re trying to say when you need help, it’s not a laughing matter. We don’t want people to feel stigmatized or made fun of.”