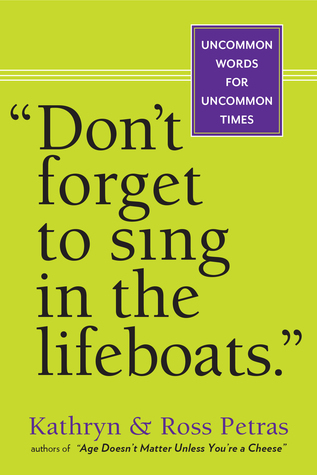 Although it’s a book of self-help and inspirational quotes, the most therapeutic quality of Kathryn and Ross Petras’s Don’t Forget to Sing in the Lifeboats (2009) is its very title. When I recently saw the book on display at a local bookstore, I just kept giggling at the title. And I’m still giggling about it.

You see, when I think about dysfunctional organizations hell-bent on doing dumb things despite abundant reasons that support taking a different course, I quickly lapse into Titanic references. As in “aiming for the iceberg,” “reshuffling the deck chairs while the boat is sinking,” and so forth. Don’t forget to sing in the lifeboats is the next logical chapter in the story. Hey, we may be on a sinking ship, but at least we can invoke our gallows humor and laugh about it, right?!

Now, gallows humor can have the effect of baking in a deep cynicism. If you’ve reached the point of laughing at something you don’t like, then negotiating a better, more constructive relationship with it can be difficult. Such is the case with workplaces.

On the other hand, humor can be a useful defense mechanism and a powerful source of resiliency. If, for example, you’re in a crazy-making workplace, a healthy sense of humor can help to preserve your sanity.

So if you’re in that lifeboat, then maybe it’s time to burst into song. Anyone up for a few rounds of “The Beer Barrel Polka“?

(For the curious, the book title is actually an adaptation of a quote from the French philosopher Voltaire: “Life is a shipwreck, but we must not forget to sing in the lifeboats.”)