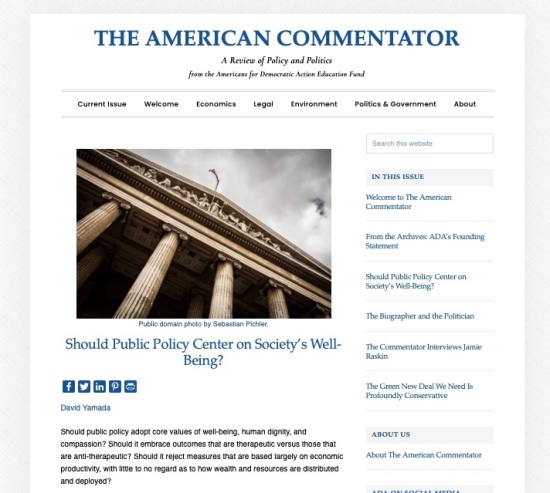 Dear readers, I’m delighted to share with you a short piece I wrote, “Should Public Policy Center on Society’s Well-Being?” (link here), for the first issue of The American Commentator, an online magazine published by the Americans for Democratic Action Education Fund, a progressive political and policy education group on whose board I serve.

In the article, I assert that societal well-being should be a framing goal for the making of public policy. In offering the case, I reference my work in drafting and advocating for the anti-bullying Healthy Workplace Bill. Here are some snippets:

Should public policy adopt core values of well-being, human dignity, and compassion? Should it embrace outcomes that are therapeutic versus those that are anti-therapeutic? Should it reject measures that are based largely on economic productivity, with little to no regard as to how wealth and resources are distributed and deployed?

To help us develop frameworks for advancing traditional liberal values with a compassionate, humane, yet practical voice, I propose that the field of therapeutic jurisprudence can critically inform our understanding. Founded in 1987 by law professors David Wexler (then at the University of Arizona) and the late Bruce Winick (University of Miami), therapeutic jurisprudence (or “TJ”) is a school of legal theory and practice that examines how laws, public policies, and legal systems can produce therapeutic or anti-therapeutic results. While respecting traditional legal precepts such as precedent and due process, TJ inherently favors outcomes that advance human dignity and well-being.

Therapeutic jurisprudence principles have informed my work in drafting and advocating for workplace anti-bullying legislation, informally known as the Healthy Workplace Bill, which serves as the template for legal reform efforts across the nation to create a legal claim for severe, targeted psychological abuse at work. In addition, I have invoked TJ in calling for human dignity to be the framing principle for American employment law generally.

I hope you’ll consider reading the full article! It’s about a 10-minute read. And you can access the entire first issue of The American Commentator here.